Aussie Meat Pies. Delicious little two-bite versions of the irresistible traditional Aussie meat pie. Rich beef gravy filling in flaky, golden brown pastry. Perfect snack for any party. Everyone loves these pies! You can also use the leftover filling you’ll have from this recipe in many other ways.

I really enjoyed trying all the pies on offer. I think it’s that you can just feel the ancient history when you eat a pie, which was basically the first sandwiches back in the days of King Henry VIII.

I enjoyed so many great pies eaten in amazing old pubs. But I fell in love with Aussie meat pies. The pies in Australia are actually simpler, I think, with less choice of filling – but my gosh, what they do, they do it so well. In come “party pies’ into play, which are basically a mini handheld version of a big pie. Even better still!

I need to clarify a couple of things about my Aussie Meat Pies recipe so as not to ruffle the feathers of any Party Pie Purist. I had to call my post “Mini Party Pies” because the actual party pies are a little wider than standard-sized muffins. For my Aussie Meat Pies recipe, I’ve used mini muffin trays, meaning these pies are 1-2 bites of pure heaven. Also, just the right size for little hands (that is if you are willing to share any with the kids).

Also, just to clarify that I know that the traditional Aussie Meat Pies has a shortcrust bottom and a puff pastry top. For simplicity, I’ve used all one pastry here. Now, about that pastry. With this recipe, you can take a big shortcut and use some sheets of shortcrust pastry. However, I want to share with you the most amazing Perfect Savory Pastry Recipe that my neighbor Bonnie passed on to me from her mum.

The filling quantity listed in this recipe is actually about double what you need to make 72 little Aussie Meat Pies. Bear with me. I’ve done this on purpose! I know this sounds like so much filling, but you have to remember that 1. These pies are small: you only need 1 heaped teaspoon to fill up the mini muffin tin pies. And 2. The filling is so delicious that, trust me, you will use this mixture again!

You can freeze the leftover filling for another time, and here are some suggestions:

– Add 1 tablespoon of sesame oil for an Asian dumpling filling or beef stir-fry.

The cooked mixture freezes very well, and I’m a big believer in batch cooking, so that will save you time in the future if you make up the stated amount.

Use the leftover filling in so many ways! 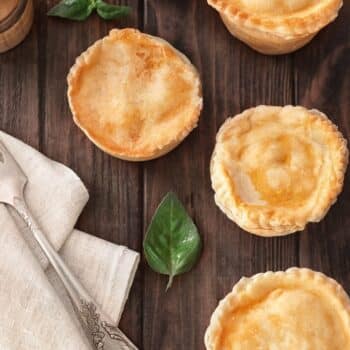 Don’t worry about finding the exact shape cutter – look around your kitchen and find something that works for the size of your muffin tray. I used the lid from a spray oil can for the bases, which needed to be a little bigger than the lids.