This simple wonton soup is so delicious that it’s made us cut back on our takeout orders in the fall/winter months. I double the batch of wontons I make and freeze them, so every time we want soup, it’s a simple matter of boiling chicken broth, adding whatever compatible ingredients we have on hand, and throwing some of the frozen wontons in. I even add ramen noodles (without the seasoning packet!), making for a nice, filling weeknight dinner.

I’ve separated the directions for the wontons and the actual preparation of the soup since I switch it up a little depending on whether it’s the only thing we’re eating for dinner or if it’s just an appetizer. I also bumped up the seasoning a little bit and added a little bit of seasoning to the broth itself when preparing. I like getting ground pork from the Asian market, it’s not as fine a grind, and I like the texture; plus, I think it’s a little fattier, which is never bad. Regular ground pork from the supermarket also works just fine. Enjoy this wonton soup recipe. 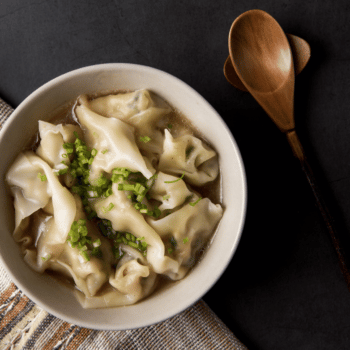