Since we found something like 11 pounds of ground beef earlier this week, and it didn’t look like it would last, we decided to cook it all right away. We made keto spaghetti sauce to have with spaghetti squash. This keto spaghetti sauce is pretty easy to make. The ingredients are pretty basic: ground beef, onion, tomatoes, and spices. The most complicated part is figuring out your spices. You are only adding them for taste, so add what smells right. The spices that we used were oregano, salt, pepper, and Italian seasoning.

With both the meat and the onion, we cooked them in a frying pan before combining them in the crockpot. We first cooked the ground beef to brown it. This also helped keep some of the fat out of the sauce. However, it also left fat in the pan for frying the onion.

Once the beef and onion are cooked and added to the slow cooker, you must add your can of tomatoes and spices. This is where I tell you that the order in which you add your ingredients together doesn’t matter, as long as you ensure that your spices are evenly mixed in. Mix up your ingredients and let the mix sit, cooking on low, in your cooker for at least 8 hours. You can leave it in for pretty much as long as you need. We left it simmering until at least some of the water had evaporated.

We cooked some spaghetti squash to eat with our keto spaghetti sauce, but you should cook up whatever pasta substitute you want with your sauce. I’ll be honest; I eat it without anything else half the time I make a sauce like this. So you eat your food however you want. 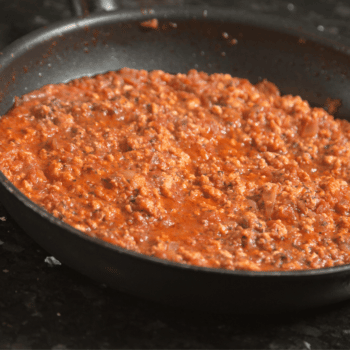 Gretel Shaw
More and more people are turning to ketogenic diet for weight loss. With that in mind, I'll share with you a diet-friendly recipe you'll like. This slow cooker keto spaghetti sauce will be perfect on your diet. It's so easy to make as well!
5 from 2 votes
Print Recipe Pin Recipe
Prep Time 15 mins
Cook Time 15 mins
Total Time 30 mins
Course Main Course
Cuisine Italian
Servings 4 people
Calories 321 kcal

My Delightful Secret Taco Recipe Is Out