This is a tasty Asian-Style Dumpling Soup that my family and I really enjoy eating. It is inspired by the Vietnamese “Pho” rice noodle soups that we always order when we eat at Vietnamese restaurants. A true Pho soup is based on a slow-simmered stock flavored with a variety of spices that give it a very distinctive flavor, whereas I just used my everyday chicken stock.

However, next time I plan to experiment with making a more authentic Pho stock first. But even so, it was really tasty!

The easy dumpling soup is simply meatballs based. They are super tasty. I just love the combination of flavors in these meatballs.

This Asian-Style Dumpling Soup is actually pretty simple, even though it may look like there’s lots of stuff involved. Just think of all that wonderful, nourishing dumpling soup broth that you’re getting in a bowl of this Vietnamese dumpling soup! 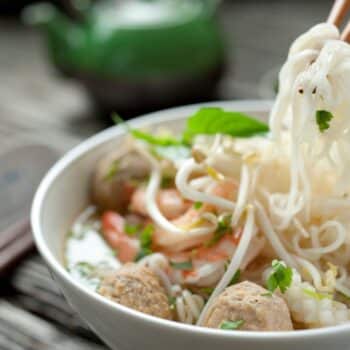 TO MAKE THE SOUP BASE:

TO MAKE THE DUMPLINGS:

OPTIONAL – FOR GARNISHES/FLAVORINGS (PER SERVING):