Fun fact: Every time I talk about Greek food, I always mention my love of moussaka, yet I have never actually written a post dedicated to this hearty Hellenic feast until now.

Moussaka is something that I can only make when I am home alone and when I know that the house will remain empty for at least three hours. There are several reasons for this; it’s a long process, while the components are not entirely complicated, they are plentiful.

I also manage to use every pot and pan we have and spread myself over every surface in the kitchen and a large portion of the dining table, too. I don’t like people getting in my way while I’m in the kitchen, and I find it even more infuriating when people think they’re being helpful by starting to tidy up for me before I finish.

So, I had a few hours to myself the other day and wanted to take advantage of it. When I say you need a few hours, I mean it, a minimum of two, or at least the ability to start in the early evening, unless you want dinner around midnight.

For those who don’t know, moussaka is essentially a Greek lasagne. It uses eggplant in place of the pasta sheets and should be made with lamb mince. It is cheesy and warm, and the aubergine is soft and salty, the sauce packed with flavour – the Valhalla of comfort food!

Step one:
Slice our eggplants into round slices, salt them and set them aside for about ten minutes. By adding salt to the eggplant’s flesh, the bitterness is removed – otherwise, the whole balance of your dish could be upset.

Step two:
If you are going to use potatoes, now is the time to peel and parboil them. They will be used as the base of the dish. I don’t always bother with them, but that’s not to say you should completely ignore them.

Step three:
Rinse the salt from the eggplants, whisk an egg and coat the eggplant in egg before bathing them in breadcrumbs. Experimenting, as usual, I covered mine in a mixture of breadcrumbs and ground almonds to get another flavour in there. Drizzle the eggplant slices with a dash of oil and bake at 150°C for 30 minutes, flip them over at the 15-minute mark.

Step four:
While the aubergines roast away, try and concentrate on something other than the beautiful smell escaping from the oven. There will soon be equally delicious aromas coming from your stove – it’s time to start working on your sauce. I use to follow a simple tomato sauce recipe; garlic and onion sweated down in oil, a bay leaf and a dash of wine if I’m feeling fancy, salt, pepper, a can of tomatoes and a bit of tomato paste. Simmer on low heat for about 30 minutes while you’re preparing the final components.

Step five:
Fry your mincemeat in a frying pan, drain the fat and reserve for later. Add the meat to the sauce once it has reduced nicely. It should be time to take your eggplant out of the oven.

Step six:
Now for the béchamel. As part of my zero waste policy, I use the fat from my mince to make my sauce. Butter can add a nice sweetness to a dish, but I like my béchamel on the savoury side. I know that using lard is not something most people are too keen on – so the choice is up to you. Melt two tablespoons of whichever fat you prefer and whisk in two tablespoons of flour and a pinch of nutmeg until it forms a thick dough-like paste. Slowly pour in the milk, whisking to combine until it thickens to the consistency of custard. Add ¾ of the cheese, and we are ready to assemble!

Step seven:
Start with a smear of tomato sauce on the bottom of a large casserole dish, and follow with a layer of potatoes. Continue with the pattern of eggplant, béchamel, mince and back to eggplant until you run out – try and end with eggplant. You may have to do a mock run with eggplant first. You’ll eventually know how many slices make a layer and work out how many layers you can make from that. Pour any remaining cheesy béchamel over the top and sprinkle with the remaining cheese.

Step eight:
Bake at 180°C for 30 minutes. The top should be golden with a cheesy crunch – cover with tin foil if it looks like it might start burning.

Step nine:
Instead of staring through the oven door waiting for the dish to bake, I suggest you get a start on the dishes because there will be many of them. I ended up with two frying pans, one large and very dirty pot, two chopping boards, a mixing bowl and several plates, wooden spoons and ladles. But in saying that – I am a bit of a messy cook!

Step ten:
By far the most effortless and enjoyable – eat it! Serve with salad or nothing at all, plainly enjoying the rainbow of flavours and textures; the crunch of the cheesy top, the gooey béchamel as it mixes through the mince and the aubergines; the pièce-de-résistance, soaking up the juices of the tomato sauce while keeping the slightest crunch from the breadcrumbs. Smoky and soft, they will fall apart at the touch. Heaven. 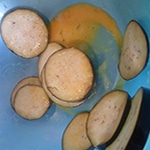