Cheesy Meaty Penne. Most of my friends are meat-eaters. By this, we mean… if it doesn’t have meat in it, it’s not dinner! In my parents’ home growing up, we had many entrees that were meatless, just by coincidence – not using fake meat, but just because the dish didn’t need meat to be good and balanced.

So, I’ve been working hard at adapting many things to my cooking. One of our go-to meals is something with ground meat and pasta, cooked in a pan. But I had some spaghetti sauce languishing in the pantry and wanted to use it up. This Easy One-Pan Cheesy Meaty Penne was the result of wanting to use (vegetarian) spaghetti sauce. So, here we go. 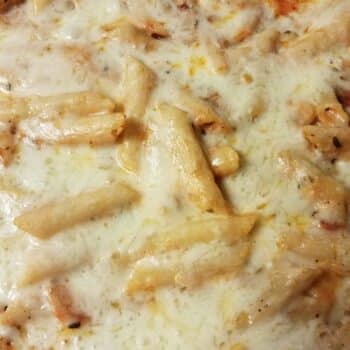