These little gems of pork-filled dim sum are one of my family’s favourite dishes. We make them every year at the beach and on other special occasions. It is excellent when everyone pitches in to help wrap the dim sum. They take a little effort, but they are totally worth the time. I typically serve them as an appetizer, but they could be the main dish with a side dish or two.

According to the cook Jeff Smith, dim sum is a style of Chinese food, and the words themselves mean “little jewels that tug at heart.” They do invite the heart’s desire to consume every last one!

As you see in this pork-filled dim sum recipe, I use wonton wrappers to make these, which can typically be found in the produce section of an ordinary grocery store. However, you can also use “real” dim sum wrappers from an Asian grocery. One works as well as the other. You do want to use the dark Asian Sesame Oil as it is more flavorful than the lighter version. This can also be purchased at either type of grocery. 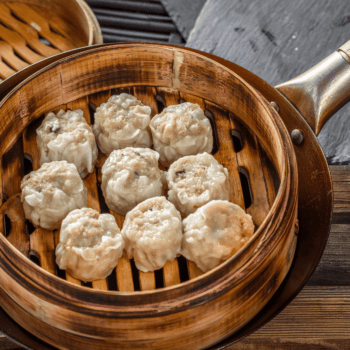 Gretel Shaw
I love dumplings and this pork-filled dim sum is my go-to. I love that I can serve this whatever the day is. People love it as much as I do.
5 from 1 vote
Print Recipe Pin Recipe
Prep Time 10 mins
Cook Time 20 mins
Total Time 30 mins
Course Main Course
Cuisine Chinese
Servings 50 pieces
Calories 81 kcal