I should call this “potato-ish soup.” We have so many players here that it’s hard to give all the credit to the spuds. Potato soup makes you think potatoes are the dish’s star, and I’m not ready to make that declaration. However, this is the only potato soup I make, so that’s what it is.

This soup is very special to me. This is the first meal I made with my husband when we were dating. He saw that I had cooked him soup, and he adorably pretended to be excited about that. I later found out that when he saw it was soup, he thought he would hate it. He thought it would be another bland soup and would leave him hungry, and “what’s all that green stuff in my soup?!” It turns out he loves this potato soup and requests it often. He learned never to judge a book by its cover that day. I think this soup is what made him fall in love with me. The old adage is true, the quickest way to a man’s heart is through his stomach.

This potato soup is also excellent the next day. The cream will separate from the broth, but it blends right back together with a quick stir. 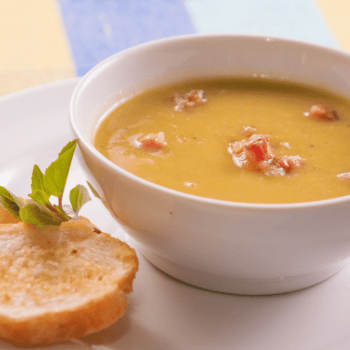