Sweet Potato Shepherds Pie is a dish that my cousin Angela has made before. The dish consists of various vegetables that are sauteed with meat, traditionally lamb, and thickened with a sort of gravy. It is then placed in a baking dish evenly, and mashed white potatoes are spread over the top of the mixture.

In the past, I wasn’t a big fan of the Sweet Potato Shepherds Pie dish. As simple as a dish, it’s easy to make it complicated with the addition of too many ingredients. After quite some time of not having the dish, Angela made the it again this week for our lunches. It was excellent, and I really enjoyed it.

Listed below is Angela’s version of Sweet Potato Shepherds Pie. She used roasted sweet potatoes that were mashed. Angela also has a seasoning recipe that she uses on meat that resembles the taste of sausage. I will post that recipe soon.

Try this Sweet Potato Shepherds Pie recipe out and tell me what you think. 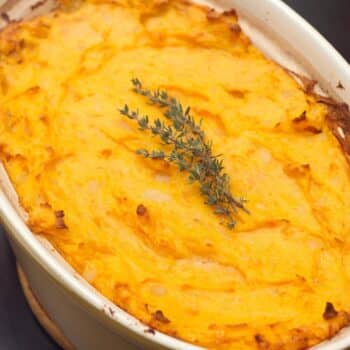