Today, I decided that I would cook, and I wanted soup. I mean, this is what it looks like out there right now: So comfort soup just sounded well… comforting. If you like stuffed peppers, you should like this Heartwarming Stuffed Pepper Soup.

Last week my friend and I went to a Cafe. My friend got the same thing as last time, and I ordered a special. I was tempted to get pumpkin pancakes, but I went with a tandoori chicken chorizo and mango hash with eggs over easy instead. It was fantastic. I loved the flavor. It had that great tandoori flavor without being overbearing. It was served with some grilled naan and a cool cucumber yogurt sauce. I really like this tiny place, but be warned, even in 20°C weather, there was a line outside for it at 8:45 am, and they open at 9 on Sundays.

Then we had a slightly slippery drive home as the rain started to pick up when we left. I braved the drive from my friend’s to my house – I despise driving in the rain. I go super slow, so everyone on the road hates me, but I’m just being careful. 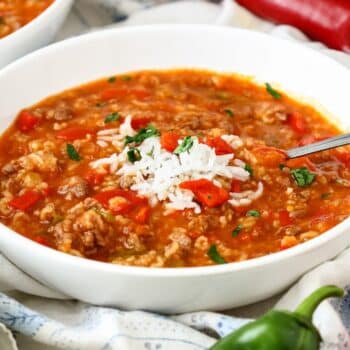