I love using lamb meat on my dumplings. Thus, I created a dumpling recipe influenced by Turkish cuisine. These Manti Turkish Homemade Lamb Dumplings may take some effort to make, but it’s all worth it!

What are Turkish Manti Dumplings?

Turkish mantis is a type of dumpling. A traditional version is made with lamb meat. The manti are usually served in a yogurt-based soup called tarator sauce, flavoured with crushed garlic and walnuts.

There are variations in the recipe. One common variation is to add ground beef or lamb to the dough, and another is to top them with poppy seeds and butter before baking.

Turkish Manti can also be made with beef, pork, or chicken meat instead of lamb for a different taste.

What is the difference between Manti and dumplings?

Both Manti and dumplings are circular, stuffed pastries made from flour.

Mantı is a type of dumpling that originates in Central Asia and the Middle East, while Chinese potstickers originate in Northern China. Mantis boiled or steamed with water before being fried to serve them crispy on the outside, while potstickers are usually boiled and then pan-fried.

Recipes for the dough – use different ingredients like potatoes, chickpeas, or spinach.

Manti is sometimes made without meat but filled with other ingredients like cheese, potatoes, or vegetables for vegetarian dishes.

Tips on how to serve traditional Manti dishes

Mantı is often served with yogurt, garlic, and mint sauce in Turkey. In the United States, it is common to serve Mantı in a soup made from chicken stock or beef broth. Mantı can also be dipped into sauces like soy sauce, vinegar-based hot sauces, sweet chilli sauce, or tomato ketchup before being eaten. 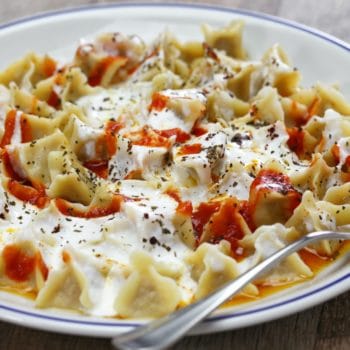 Pork Potstickers With Ginger and Sesame

Pork Potstickers With Ginger and Sesame