Picture of Shrimp And Pork Dumpling Soup ready to serve.

It is officially fall, which means it is SOUP SEASON! Yes, be expecting a lot of yummy soup recipes here, like my recent heartwarming taco soup and, this time, my Shrimp And Pork Dumpling Soup.

I had spoken of my love affair with soups in the past when I shared my The Perfect Turkey Meatball Tortellini Soup With Spinach recipe (link recipe!), but my love for Asian soups is a completely different story. Dumplings, noodles, egg drop soup, it’s all good in the hood!

This soup, in particular, is unique because it includes both shrimp and pork, which in theory sounds really strange but actually comes together quite effortlessly to create an Asian flavor explosion in your mouth.

This Shrimp And Pork Dumpling Soup is definitely one of my favorite recipes to make, and it never fails to be a crowd-pleaser, even to the pickiest eaters! It is slightly time-consuming, so I would recommend saving it for a weekend or a weeknight when you aren’t pressed for time.

Shrimp And Pork Dumpling Soup can easily serve 3 with plenty of leftovers (my favorite leftovers ever!). Just make it, and I promise you will not regret it for one second! 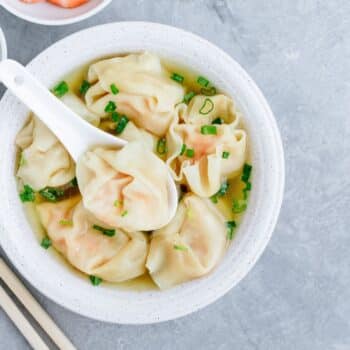 Yes, it really is as good as I say it is… I promise! It is the absolute best on a chilly Sunday evening. You will definitely have enough for lunch the next day. What are some of your favorite soup recipes?