This tasty Spiced Pork Pie-lets dish is served as part of a post-midnight Christmas Eve feast and is a hearty pie of pork spiced with cloves, allspice, cinnamon and nutmeg wrapped in a buttery, flaky pastry shell.

According to the recipe from Cook’s Country magazine, a tourtiére “is always a double-crusted pie with warm spices, but many of the other details are up for debate,” such as whether or not to use a potato, a meat mixture of beef and pork or just pork and unlimited crust options.

This Spiced Pork Pie-lets recipe appealed to us on various levels. It was a savory pie that wasn’t of the usual pot pie variety. Personally, I am absolutely smitten with “warm spices” such as nutmeg and cinnamon (which I sometimes add to my morning coffees) — which aren’t overly popular cooking spices during spring. And of course, that whole living dangerously in the kitchen by baking something out of season to celebrate the season.

Changes I Made To My Spiced Pork Pie-lets Recipe:

While I followed the recipe, I made a few changes. Okay, one crucial one. Since it is just myself and sometimes a friend of a family member visits, I halved the recipe and divided the filling into four ramekins and only did the top crust — think personal pot pies. It really just becomes more about the shell and less about the innards.

A Lesson I Learned:

Be sure to watch the onions while browning in the Dutch oven. Brown to burnt is a very short time frame. Luckily our corner market carries onions, and we were able to start over with only a bit of a hiccup. 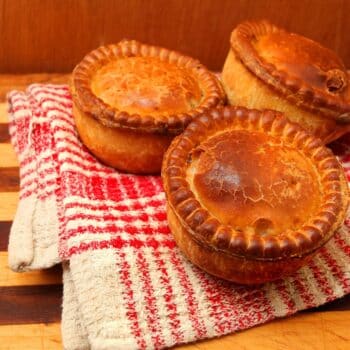 TO MAKE THE FILLING:

TO MAKE THE CRUST:

TO MAKE THE EGG WASH:

TO MAKE AHEAD:
Wrapped dough can be refrigerated for up to 2 days or frozen for up to 1 month. If frozen, let the dough thaw completely on the counter before rolling. Assembled pie (without egg wash) can be refrigerated for up to 24 hours before brushing with egg wash and baking. PLAN AHEAD:
Both the pie dough and the filling need to chill for an hour or more before the pie can be assembled and baked. If time is short, use store-bought dough. Shred the potatoes in the large holes of a box grater just before cooking. Don’t soak the shreds in water, or their starch will wash away, and the filling won’t thicken properly. To cool the filling quickly, chill it in a large baking dish. Eat the pie when it’s just slightly warm.