Picture of German meatballs with mashed potato ready to serve.

German Meatballs (Königsberg Meatballs). The dish is named after the Prussian city of Königsberg (now Kaliningrad) and is one of the delights of East Prussian cuisine. In Germany, the dish was officially called “Kochklopse” or “boiled meatballs” (see related boiled meatballs recipe here). This is to erase any reference to its namesake city, which in the aftermath of World War II had been annexed to the Soviet Union, with its German inhabitants expelled.

The German meatballs are ideally made from very finely ground veal (though cheaper beef or pork is often substituted), onions, eggs, anchovy, and spices.

The meatballs are carefully simmered in a spiced broth, and the broth is then mixed with cream, egg yolk, and pickled capers.

The German meatballs dish is usually served with boiled potatoes or, less traditionally, with rice or noodles. I recently tried it on Tagliatelle, which gives it a little bit of an Italian-German fusion twist. 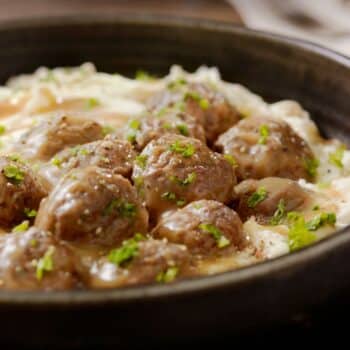 FOR THE MASHED POTATOES:

BEGIN WITH THE MEATBALLS: