I’m so full, I can barely breathe, but I had to get this Awesome Braised BBQ Brisket Tacos recipe posted so I could share it with you as soon as possible.

Tonight’s dinner was awesome! I’ve had off for the last two days and have been cooking lots. Yesterday, I found the perfect portion of beef brisket at the food store, just about 1 pound and small enough that I wouldn’t feel guilty about making a huge ground beef meal for four.

Keeping that in mind, I grabbed a bottle of Jack Daniels BBQ sauce on my way out and knew I had some ingredients at home that could enhance the flavor of the BBQ sauce.

This morning, I did a little research and development, looking up various brisket recipes, taking a few ideas here…a few ideas there, and adding what I thought would make for a yummy combination of flavors.

I crossed my fingers, let the brisket cook for almost three hours and out came the most flavorful, tender, savory BBQ brisket tacos ever. The sauce was even better and tasted of sweet and tangy BBQ sauce with just a hint of flavor from the onions and garlic it cooked with.

I topped the BBQ Brisket Tacos with some sour cream and a sprinkling of cheddar cheese, and you have a hearty, satisfying dish! Try this recipe this weekend; it’s the PERFECT football meal!! Oh, and let me know how you like it! 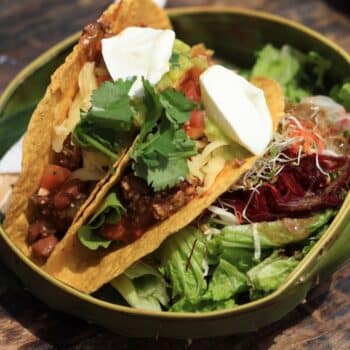